Between 28th December, 2015 and 17th January, 2016, Wildlife Recue & Information Network [WRIN] member Garry Cheers attended the fire ground in the Scotsburn area south of Ballarat having only 2 short breaks to recuperate and also allow the affected animals a little respite to settle so they could be observed more easily and calmly. A huge number of animals, mostly macropods [Eastern Grey Kangaroos and Black Wallabies] were dealt with during that time. Entry to fire ground was requested by DELWP.
Garry, on behalf of WRIN, would like to thank the following organisations for their assistance with funds or products. Without this assistance much less would have been accomplished and fewer animals would have been attended to. It is highly likely that more will be done in this area over the coming weeks as well as assisting in other areas of Victoria currently burning.
THANK YOU TO :
IFAW for their assistance with accommodation and fuel vouchers for the rescuers and hay for the animals on the fire ground.
RSPCA for the use of two four wheel drive vehicles.
LORT SMITH ANIMAL HOSPITAL for supplying medications for tranquilising animals needing to be closely checked or sedated for transporting into care.
WOOLWORTHS SUPERMARKET, MARYBOROUGH for their generous supply of drinking water for rescuers. 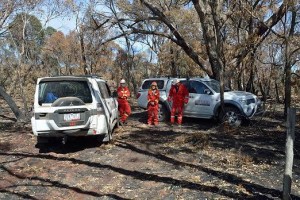